What Is Important And Why Should An ID Be Translated? was last modified: January 9th, 2020 by Certified Translation

Home → Translation News → Certified Translation → What Is Important And Why Should An ID Be Translated?

09 Jan What Is Important And Why Should An ID Be Translated?

There are a lot of regulations that we have to follow in life. Some wonder if it is really necessary to have rules. They question the usefulness of paperwork and the good it brings into our lives, if any. But it is human nature to question things. If we never questioned the way things were, we never would have been able to change them. A lot depends on the power of curiosity. We wonder about things, we get curious, and then we try to find answers to the questions our minds come up with. This is a cycle that has always been in play ever since humans came to the earth. If we stopped wondering, we will disrupt the cycle and stop the progress of our world.

The world relies heavily on the curious minds. They gave us inventions that changed our lives. They found cure of diseases and fixed so many problems in all walks of life that we managed to come a long way. But some questions are not helpful to the society. They only add stress to your life because there is no complicated answer to them. Like questioning the usefulness of regulations is something we can do for years and still not find a good solution.

We may have had material progress thanks to our inventors, but it would have been of no use without updated moral codes. When things change, so should the rules. People had different rules when they were dueling but not only is that illegal now, it is also socially unacceptable. You will not see people going around with swords in their hands because it is not the 14th century. This is why the laws of today may look completely different from those of the past and it is because they are. We cannot live in such an advanced world without a few rules and regulations to keep us in check. In truth, the rules are more for our safety and benefit than to keep us on the straight path.

If there are no rules in a society, its citizens will not be safe from one another. Things will also get stolen more frequently and fraud will be pretty common. But thankfully we don’t have to think about such a world because we live in a society where there are rules. Government records are the best way to keep track of the population and distribute benefits among the citizens. 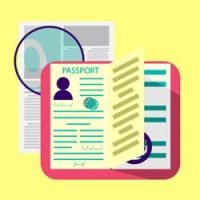 If there were no records, anyone can claim to be a person and they will have to be believed without any proof. Today, if you tell your real name to someone, you know your statement can be backed by your identity card. You can show your identification document to anyone and they will be sure that you are the person you claim to be. Your ID card will get you into a lot of places. It is what helps you when you want to travel out of your homeland. In a few countries, every citizen must have their identification document with them at all times. It is for security purposes and helps the government ensure the safety of the citizens.

Identification documents are different everywhere from format to their language. There are some countries that make ID cards in more than one language. It happens when there are multiple official languages or there is a difference between the native and the administrative vernacular. But when there is only one language on the card, it might not be valid in a foreign country.

Translate ID, what is important and why should it be translated?

When your ID is not in English and you want to visit a country where the official language is English, you will have to get it translated. You can’t show an identification document in Arabic to someone who only speaks English and expect them to understand it. If you are applying for a job in a foreign country and the company asks for your identity paper, you will also need a translation in that case too.

There are a few things that should be considered when you are about to get your ID translated. You shouldn’t rely on an inexperienced professional, and it is better to completely avoid online tools of interpretation. When it comes to official documents, translation has to follow certain rules. It has to be certified and follow the format of the original record. If the original and the translated document are placed side by side, the only difference should be of the language. A qualified translator can handle such documents with the type of attention they require. Each detail must be kept into account and the accuracy should be a hundred percent.

There are a few good translation agencies with a hundred percent acceptance rate. Documents handled by them gets accepted by all government bodies. Which is why you should get in touch with one such agency for the translation of your ID. They will assign an experienced translator the task and you will get it delivered to you within a day. You also won’t have to pay a huge sum for this translation. This is why it is better to stick to the professionals and not try your luck with the internet or bilingual friends. Once you get a certified translation of your ID, you can show it to foreign officials with full confidence and no one will doubt your identity.